Heath Long is a fourth-generation farmer, raised on the family farm near Tichnor, Arkansas. He has worked on the farm for the past 20 years, helping to expand the business before taking full control of it following his father’s retirement. Heath, his wife Betsy and their daughters Shelby and Sydney were recognized as the Arkansas Farm Family of the Year in 2012. He currently serves as President of the Arkansas County Farm Bureau Board of Directors and as a member of the Arkansas and USA Rice Councils.

Today, Heath farms rice, soybeans and wheat. The Long Planting Company consists of over 2,200 acres, with 1,100 dedicated to soybeans, 870 to rice – including RiceTec hybrids – and roughly 200 acres to wheat. The Longs have taken advantage of new technologies in seed and crop protection to improve the efficiency of their farm. To save on energy costs, they converted a number of their diesel-powered irrigation units to electric.

Heath is a proud graduate of Arkansas State University, where he earned his degree in agriculture. He also volunteers with the Tichnor Fire Department. Betsy teaches at Gillett Elementary School and serves in a number of capacities at Gillett United Methodist Church.

Needless to say, RiceTec is very proud of its partnership with exceptional growers like the Long family. 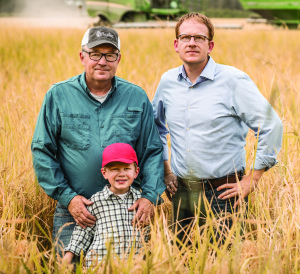 For five generations, the Isbells have cultivated rice on the Central Arkansas land that the family calls home. Today, they have some 3,500 acres in production, including RiceTec hybrids. Isbell Farms employs proven products, technologies and techniques to ensure maximum sustainability. One such advancement developed on their farm has become widely known and adopted around the world: “Zero Grade leveling.”

The farm began to take its current shape when Leroy Isbell completed his service in the U.S. Navy after World War II and returned to Snake Island, Arkansas, to build his family and farming operations. Over the years, he would grow it in both size and efficiency. By the late 1970s, laser technology was making it possible to level land precisely. Leroy had a practice in mind that he would pioneer and for which he would be inducted into the Arkansas Agriculture Hall of Fame. And that is how Zero Grade leveling came to be.

For those unfamiliar with it, Zero Grade leveling is accomplished when laser or GPS technology is employed to level an area to a completely level plane. Large blocks of land can be surrounded by just one perimeter levee, making it possible to irrigate with the opening and closing of a single gate. Not only does this result in significant labor savings, it can also lead to as much as a 50% reduction in water usage, while it requires fewer herbicides and fertilizer inputs.

Additionally, in the late 1980s, Chris Isbell began to explore diversifying his rice production by examining special and emerging markets. That led Chris to take on the challenge of growing Japan’s most prized varieties, including Koshihikari rice. By 1990, Isbell Farms was being visited by scores of Japanese journalists and soon began marketing Koshihikari to Japanese consumers in the U.S. Shortly thereafter, Chris began selling it in Japan in packages labeled as produced in the U.S.A. on Isbell Farms, an unprecedented accomplishment.

In recent years, the focus has turned to an even rarer crop, sake rice. Isbell Farms is now producing small batches of rice specifically cultivated for crafting high-end Japanese sake. It is no wonder that Chris has been named Rice Farmer of the Year and is an active industry leader.

Today, Chris Isbell has been joined on the farm by his children and in-laws – Mark Isbell, Shane Isbell and Jeremy Jones – along with their spouses and grandchildren. Mark Isbell holds an MA in agriculture and is a graduate of the Rice Leadership Program. He helped draft the Arkansas Water Plan, which seeks to ensure water sustainability for Arkansas’ future.

At RiceTec, we could not ask for a finer partner than Isbell Farms. Ross Hebert of Herbert Farms is one of the innovators of farming rice and crawfish in south Louisiana.

A third-generation farmer, Ross follows in the footsteps of his grandfather Kern Broussard and his great grandfather Rexby Dubius. He has been farming in Louisiana for 20 years and has been planting RiceTec products for over 10 years. Hebert Farms consists of 3,500 total farming acres, 1,800 of which are planted with RiceTec hybrids.

Hebert Farms operates on a rice-crawfish-fallow rotation using 100% ratoon crop. Crawfishing is deeply embedded in Louisiana’s culture, and has gone hand-in-hand with rice farming since the 1980s. Crawfish farming fits well into many existing farm operations by using marginal agricultural lands, permanent farm labor, and farm equipment during off-peak farming periods. Rice straw residues promote the organisms that end up been food for crawfish. Studies conducted by Louisiana State university show that hybrids more forage which in turn produce more crawfish over a longer period of time. When crawfish are rice fed, the taste is markedly improved.

At Hebert Farms, Ross employs technologies such as grid soil sampling and yield mapping to find and correct any areas that are nutrient deficient. Herbert Farms also applies variable rate fertilizers and uses chicken litter (an organic fertilizer) to increase tillering and enhance the soil.

Ross is part of a network of farmers that have been planting RiceTec replicated farm yield trials for the past 8 years. He knows that RiceTec offers a significant yield advantage over University and Clearfield varieties that has kept his farming operations successful and profitable. “Without RiceTec, I would not be farming today,” says Ross.

Ross holds a Bachelor’s Degree in Science from the University of Louisiana at Lafayette and has three children (Hollyn, Sara, and William) with his wife Tonya.

RiceTec is pleased to partner with innovative farmers like Ross Hebert of Herbert Farms. Timothy graduated from Texas A&M University with a degree in agricultural engineering and went on to work for the largest U.S. ethanol plant, located in the Texas panhandle. In late 2008, Timothy and his cousin Daniel took an opportunity to begin farming independently of their fathers and uncles and planted their first crop in 2009, which included RiceTec hybrid rice.

After graduating from the Rice Leadership Program in 2012, Timothy became heavily engaged in industry leadership positions. He currently serves as a member of the USA Rice Farmers Board of Directors, USA Rice Federation Board of Directors and on the Federation’s Sustainability and Regulatory Affairs Committee. Locally, Timothy is a board member of the Wharton County Farm Bureau and sits on the board of the Texas Rice Producers Legislative Group.

Timothy was the winner of both the 2015 Texas Farm Bureau Discussion Meet and the 2015 Texas Farm Bureau Outstanding Young Farmer & Rancher Award. He then went on to the American Farm Bureau Federation where he placed in the Top 10 of the Outstanding Young Farmer & Rancher national competition. Just three years into their farming careers, Timothy and Daniel received the 2012 Farmer of the Year Award from the Coastal Bend Soil and Water Conservation District for their enthusiasm for implementing innovative conservation practices across their operation.

Timothy and his wife, Lindy, have three young sons that are already training to be the sixth generation of Gertson farmers.